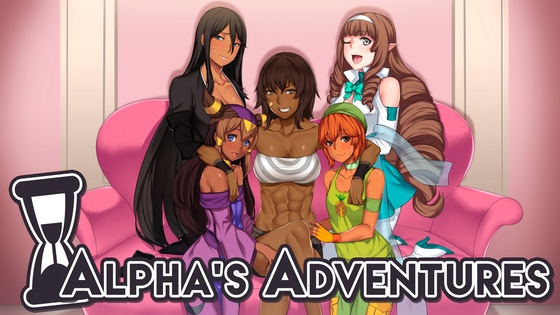 A multi-route Yuri visual novel with 4 heroines to choose from, each with their own genre. Extra content unlocks as you play along!

Latest Updates from Our Project:

Its official, Alpha's Adventures will be coming to Steam! We managed to get 1,140 "Yes" votes in 13 days. I want to say a big thank you to everyone who took the time to give this project your vote!

Good news, the WIP of Iori and Aiko is now finished! Before showing it off I'd just like to clear up any confusion and state that the fanart book will be available to anyone pledging £45 or more, you do not have to be backing the physical £45 tier in order to receive it!

With that said, here is the finished result with all of its variations!

I hope you all like how it came out, let me know what your favorite version is! If I have to pick just one, mine would be the wet swimsuits ~

Wow, yet another stretch goal has been reached! Thanks to the continued support of all our backers, Alpha's Adventures will now have at least 15 unique tracks composed entirely by the talented Ryunocore, whose work you can listen to here:

For those who are eager to hear more tracks, you'll be happy to know that Jaylah's route is being worked on, where she'll be getting a new theme of her own!

I hope to release an updated demo containing Jaylah's route in the upcoming week!

Since we're almost halfway to the current stretch goal, I wanted to show off a preview for the next one!

I thought it'd be good to have at least one drawn example of the kind of content the fanart book will contain if met, so that people who are on the fence about backing the £45+ tiers to get it can come to a decision.

The fanart book will contain illustrations both from artists who are already involved in the project, and those who are contributing solely to the creation of the fanart book! This WIP example is from one of our project artists:

The majority of the illustrations will contain alternate versions such as different expressions/outfits, like this:

There are even versions that will turn up the age rating...

I hope this demonstration has gotten you more excited to reach the fanart book goal!